In Aug 2021 I wrote my original post describing my knowledge management and productivity workflow, including the various tools I’d stitched together and some of the challenges I was having. Over a year on and I’ve been making some more significant changes to that tooling and as 2022 comes to a close I thought I would look back on that original post and reflect on what I’ve changed, fixed and learnt along the way.

RSS is more important than ever!#

When I was building my original workflow RSS was all the rage and Google Reader was king. The death of Google Reader in 2013 and the general move of tech discourse towards social networks like twitter meant that RSS has fallen out of fashion, however like many others I moved over to Feedly and quietly kept building my firehose of websites, blogs, subreddits and twitter lists.

I made the following assumption in my original post:

“I suspect that there will be many other sources in the future such as more video streams, different social networks or more long-form content such as journals."

That was an assumption based on the types on content that I wanted to be adding to my consumption but reading back it feels more like a prediction of things to come rather than wishlist.

With the recent high-profile drama surrounding twitter and the migration of much of twitter to Mastodon, there has been a quiet realization that all that knowledge, those discussions and that internet history is in the hands on one organization and could easily be taken way. I’m now seeing an increase once more in people writing content on their own sites (such like this) and an increase in the use of newsletters.

My new workflow and what’s next#

There were three core tools in my original workflow: Feedly, Pocketcasts and Pocket. All the largest players in their respective niche and all integrating pretty smoothly.

Things weren’t all perfect though, I wanted better filtering, better organisation, better bookmarking and integrating books. At the time I was exploring lots of other tools and replacements such as inoreader and raindrop.io but nothing felt quite right.

As I said at the time, I’ve had that workflow for 2-3 years and I knew even a year ago that it was soon going to be time for a change I just couldn’t find the right combination of tools to replace them. Also inertia is a real thing and even for tech folks like me, change is hard.

That all changed in Sept 2021 (a month after my original post) when Readwise announced the private beta of their Reader application. Go read that original blog post, it explains exactly that I was trying to achieve in my original post and it even contains workflow diagrams that look very similar to mine - this was clearly a tool written for me and people like me, by a team of people who really understand this problem space well. So I signed-up and waited.

In early Nov this year I finally got access and started to trial it. By this point I was a paid user of both Feedly and Pocket, was using almost all the features of both and really knew what I wanted out of Readwise Reader - I was not disappointed. 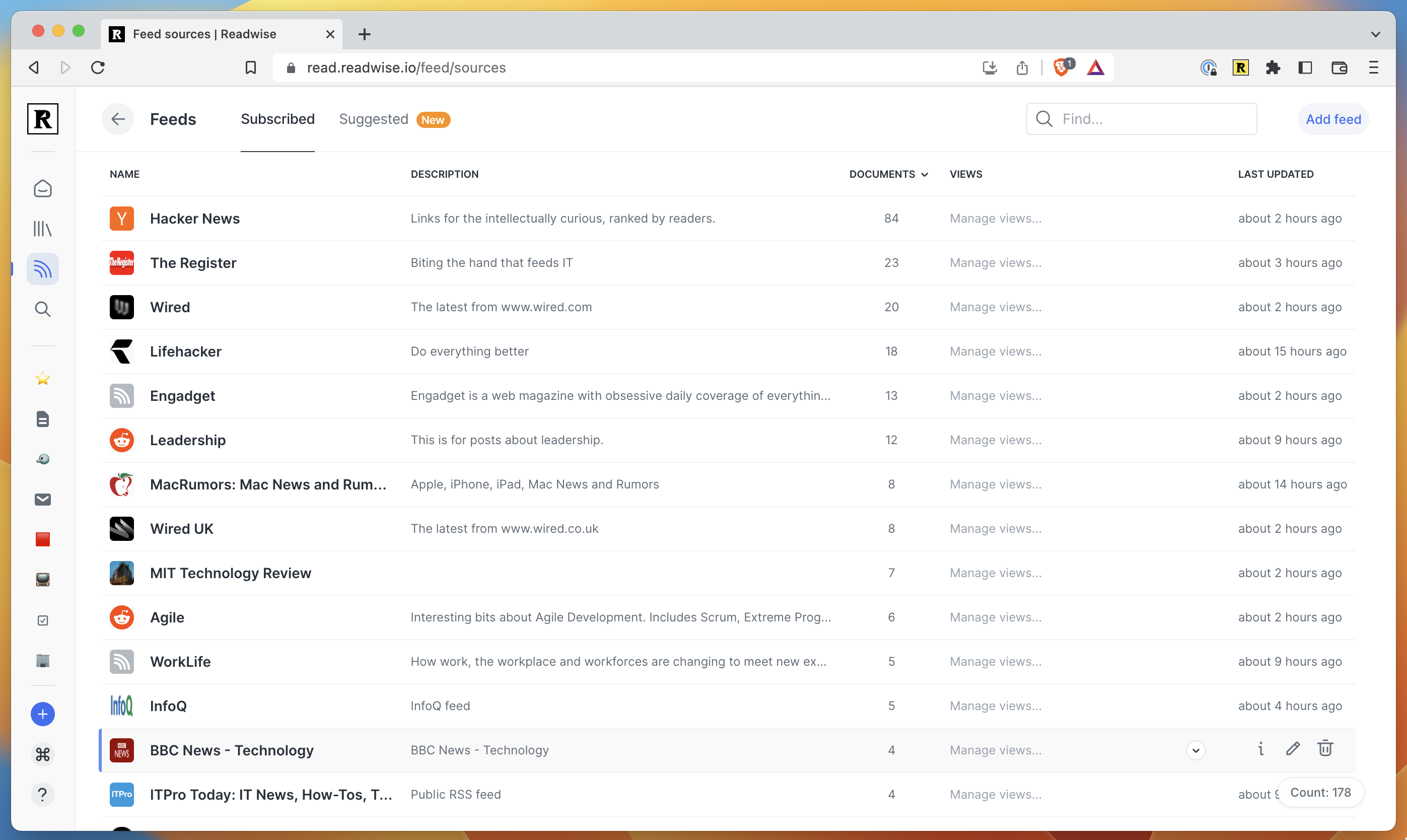 The unique aspect of Reader is that it’s an integrated product, RSS feeds and Read-It-Later all in one, which doesn’t sound a lot but when you’re not having to context switch between two applications (with different UX and different workflow) it really does make a huge difference.

Reader supports all the functionality that I would expect such as tagging, highlighting, newsletters and feed organization. But given it’s a new tool designed from the ground-up it’s rethought a few things:

It’s not all perfect though, newsletter support still needs a little bit of work to manage them better and there are a few inconsistencies between the web and mobile versions but overall it’s been a great experience.

I have to say the Readwise support team are great! I’m had bug reports resolved in the same day and the responses to feedback are always really pleasant.

What about podcasts? Well Pocketcast is still my go-to application and the acquisition by Automattic certainly felt like a positive move with a couple of recent small but significant features like: organising podcasts by folders and improved listening stats. 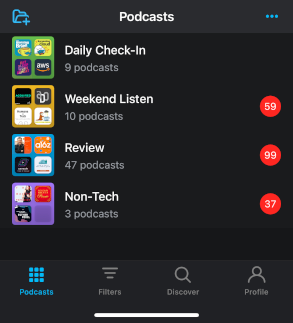 These have certainly solved my original problems as I now have my podcasts organised by “Daily Check-In”, “Weekend Listen”, “Review” and “Non-Tech”. I’m generally happy with my podcast set-up however and I have started exploring Snipd, which has the functionality to create audio snippets (think highlights) and sync them to Readwise.

I spend almost as much time listening to podcasts as I do reading feeds and social media, so it’s important that I derive as much value to them as possible. I am looking forward to seeing similar functionality in Readwise for audio and we’ve seen with video and their youtube support.

Help me, help you#

Over the past year I’ve found a few kindred sprits who share my passion for reading and writing technical content and we share similar workflows. I’ve learnt how much a core part of my purpose as a leader has been either connecting people with people or connecting people with the knowledge and context that they may not otherwise have.

Unfortunately but quite intentionally my workflow and the tools that I use don’t really have direct social integration so it’s not always easy for me to share things you with all. So instead I ask you all - reach out to me - tell me what you think. What topics are inspiring you right now? What would you like to know about? What are the favourite things you’re reading about?

Book clubs used to be a thing, I am thinking of something similar or building a very private newsletter - let me know your thoughts.